As a freshman in college, in 1978, like many in my dorm, I bought some small scale cooking appliances.

For 44 years it made toast, reheated leftovers and made itself useful. It died last month. Heating element failure. 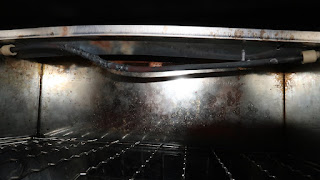 Perhaps you've seen this model. It even came with a fancy broiler pan: 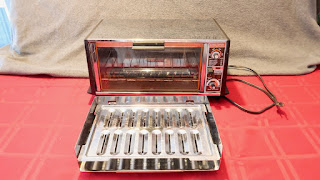 They don't make them like they used to. This one outlived the store that sold it to me by decades!

I went to Wirecutter and Consumer Reports for advice on a replacement. They definitely don't make them like they used to.

Apparently nobody buys toaster ovens that small any more. I had to re-arrange my counter top to accommodate the smallest one I could find that was from a respected manufacturer, and that would do toast, reheat, bake and broil.

The first one I got, I simply hated, and returned it. I was surprised to discover that shielding behind the heating element that keeps the top from getting too hot is not a common part of current designs.

I've got another one, still bigger than the old, dead one, that touts the hot top as a plate warming feature. (I'm not making this up.) Even so, this other one only gets to about 120F whereas the one I hated and returned clocked in at over 200F, and had instructions to move the oven 4 inches away from all walls and other objects during use.

This post is a lamentation for the departure of a good and faithful servant and for the over-designed appliances that you simply can't get any more.

Posted by PoetNerd at 6:45 PM No comments: